When I first discovered NECA shortly after the release of Prometheus, I had no idea what I dipped my toe into. After a brief addiction to their releases and apologizing my wallet, I only purchase them occasionally now. And it’s usually just the creatures. No offense to the humans in the Alien universe, but I am all about the creatures. My name is David, what else do you expect? I was a huge fan of the Neomorph from Covenant, so I had to scoop up the figure upon release. Let’s see how NECA did.

First thing you’ll notice is it looks a bit different from the version we saw in the film. That’s because this is based on the practical effect model. Quite frankly, this is the superior design. The glossed over the versions in the film, while cool looking just don’t have the same terror. According to their Twitter feed, NECA was not happy with the change for the final version and have zero plans of releasing an updated version.

As always, the attention to detail is great. They even include a baby Neomorph to terrorize the local population with:

For the release of Alien Covenant, NECA released the figure in special packing. It is covered in artwork of Dane Hallett, which is always a wise choice:

The figure itself is gorgeous. One of the best releases yet, it is quite poseable and looks great in photos. It comes packaged with two different heads, one in attack mode and one with mouth open. For the price, you really can’t go wrong if you’re looking for some quality Alien memorabilia to decorate your home or office. Or both. Just be sure to put Baby Neo on a leash, they tend to bite when provoked. As always, stay frosty…

Always hamming it up! 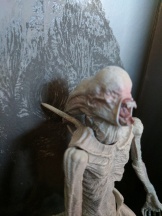